Vitamin A was given the first letter of the alphabet for a name because it was the first vitamin to be discovered. It was found that vitamin A has a large number of uses in the body including keeping eyes healthy, aiding cell growth and also helping boost the immune system. However, vitamin A is not only absorbed directly but it is also created by the body by converting beta carotene into vitamin A. Vitamin A itself is found in a number of foods such as eggs, milk, liver and meat.

Beta carotene that the body can convert into vitamin A is found in many fruits and vegetables, especially the red, orange and green colored ones. The most important point to remember that consuming too much pure vitamin A can be toxic. It is essential not to exceed the recommended daily allowance for vitamin A. The actual recommended allowance of vitamin A varies depending on a person’s age, sex and other factors. While the actual amount of vitamin A consumed may be toxic if the recommended daily allowance is exceeded, there is a far higher limit to how much beta carotene can be consumed.

Therefore it is advisable to concentrate on obtaining the greatest amount of beta carotene which the body can then convert to vitamin A, rather than consuming vast quantities of pure vitamin A rich foods. Many people will remember being told that eating lots of carrots helps you to see in the dark and that is down to the vitamin A that is produced from the high levels of beta carotene that are found in the vegetables. Other foods which have high levels of beta carotene that can be converted to vitamin A include tomatoes and dark green leafy vegetables, such as spinach. Beta carotene is not only used to form vitamin A, but it is also a powerful antioxidant in itself. 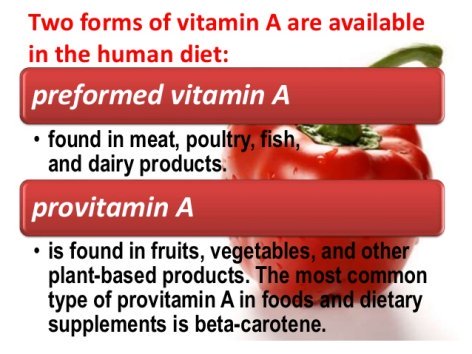 None of the beta carotene that is absorbed is wasted as any excess after conversion to vitamin A has taken place is used to fight the harmful free radicals within the body. Vitamin A also helps fight infections and illnesses by helping tissues that line various parts of the body, including the eyes, mouth, nose, throat and lungs, to grow and also to repair them if they are damaged to prevent infection. Children also need plenty of vitamin A to help their bones and teeth to develop properly.