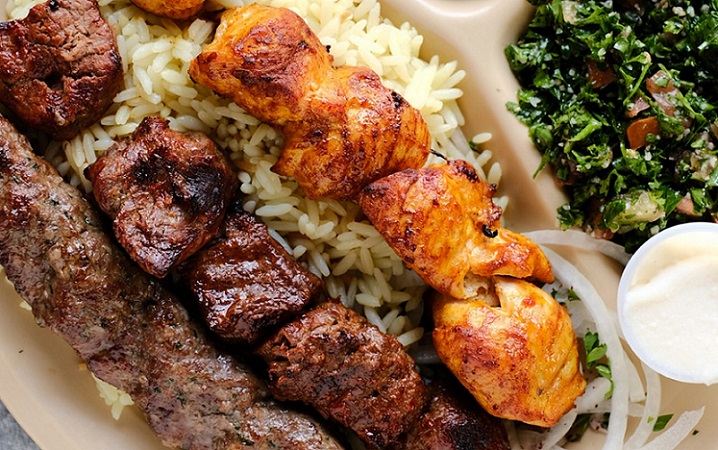 ‘Middle eastern cuisine’ is a broad term that encompasses many different cooking styles from a number of different countries. Moroccan, Syrian, Greek, Arabian – the various cuisines of the middle east share a great deal – and have many differences. The food of the Middle East is a celebration of life. No matter which country, the staples are the fresh fruits and vegetables that grow in the hills. The spices and flavorings of Middle Eastern food are those that awaken the senses, sparkling against the thicker, richer tastes of the main ingredients. Mints, lemon, garlic, rosemary – all have a fresh, astringent quality that cleanses the palate and refreshes the taste buds. Throughout the region, the cuisine varies – but these things remain the same: fresh ingredients, astringent and piquant spices, olive oil, and little meat.

Lebanese The tiny country – about the size of Connecticut – is nestled into the shores of the Mediterranean Sea, at the very crook of the fertile Crescent. Its contributions to the cuisine of the entire Middle Eastern region of the world are unmistakable. The flavors that spice the foods of all the surrounding lands can be found here in abundance – olive oil, lemon, garlic and mint. Lebanese cuisine features such staples as kibbeh (ground lamb with bulghur wheat) and tabouleh (parsley, mint and bulghur wheat salad). The food is simply prepared, with the flavors blending together into a complex medley of earthy, fruity tastes and scents.

Syrian If Syria had contributed nothing else to the world cuisine but pita bread and hummus, it would still be worthy of note. There’s far more to the cuisine of this small Middle Eastern country, though. Baba ganoush (pureed eggplant), stuffed olives and figs, peppers in olive oil – Syrian food celebrates the fruits of the earth and blends them to bring out the textures and flavors in surprising ways. Shish kebab and rice pilaf are two of the more well-known dishes, and while most people think of Greece when they hear baklava, the Syrian claim that it is based on their own dessert of batwala. 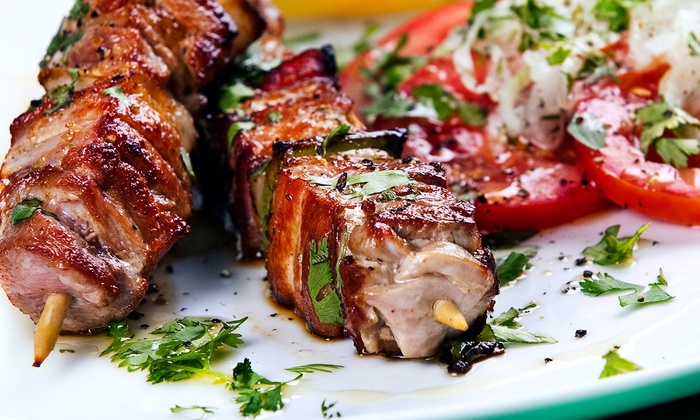 Kebab Kenjeh, also known as Chenjeh is a meat, specifically and traditionally lamb, dish in the Middle East. Originating in Iran, kebab kenjeh is now found worldwide. The meat is cooked with olive oil, lemon juice, salt, and pepper and served with rice, grilled tomato, and raw onion.

Arabian The Bedouin of the desert once based their diets on dates and yoghurt with the occasional camel or goat to provide meat. Over the centuries, the nomadic tribes incorporated spices, meats and vegetables from other cultures into their cuisine. Today’s Arabian cuisine is a mingling of influences from India, Lebanon and further west. Lamb is the meat most often used in cooking, and it is prepared in a number of ways including shish kebab, spit-roasted, or stewed. The cuisine relies heavily on mint, turmeric, saffron, garlic and sesame. Rice and kasha are the most commonly consumed grains, and the spicing is fresh and astringent – meant to awaken and refresh the palate rather than burn it out.

Throughout the Mediterranean Middle East, the cultures and people have intermingled and carried with them their foods and traditions of eating. In no other place in the world can there be found a blending of cultures that has mingled so much – yet maintained such distinct, national flavors. Healthful, fresh, delicious and life-enhancing, it’s little wonder that the cuisine of the Middle East is among the most popular with diners the world over.

Mustard And Health Its Benefits