The pizza pie is an ubiquitous symbol of both Italian cooking and Americana. Oven-baked, thin-crust or deep-dish, round or square, it is a common favorite throughout the United States, with a wide number of regional variations. The most traditional pie is the pizza Napolitano, or Neapolitan pizza. Made of strong flour, the dough is often kneaded by hand and then rolled flat and thin without a rolling pin. The pizza is cooked in an extremely hot wood- fired stone oven for only sixty to ninety seconds, and is removed when it is soft and fragrant. Common varieties of Neapolitan pizza include marinara, made with tomato, olive oil, oregano, and garlic, and margherita, made with tomato, olive oil, fresh basil leaves, and mozzarella cheese. 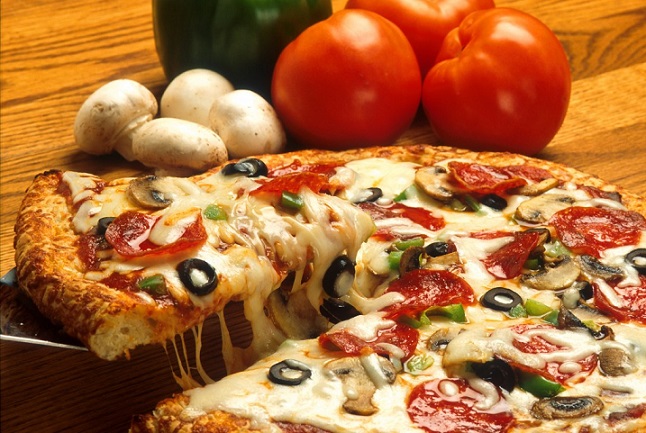 New York was home to the first pizza parlor in the United States, opened in Little Italy in 1905 by Gennaro Lombardi. It is not surprising, then, that New York-style pizza dominates in the Northeastern part of the country. It is thin-crusted, and made with a thin layer of sauce and grated cheese. The dough is hand-tossed, making the pie large and thin. As a result, it is served cut into slices, traditionally eight, which are often eaten folded in half.

It can be served with any number of toppings, including pepperoni, the most popular topping in the United States, or as a “white pizza”, which includes no tomato sauce and is made with a variety of cheeses, such as mozzarella and ricotta. Chicago is also home to a major variety of pizza. The Chicago-style pizza is deep dish, meaning it is made in a pan with the crust formed up the sides, or even with two crusts and sauce between, a so-called “stuffed” pizza. The ingredients are “reversed” in a Chicago pizza, with cheese going in first, and then sauce on top.

This particular form of pizza was invented in 1943 at Uno’s Pizzeria in the River North neighborhood of Chicago. The Midwest also plays host to the St. Louis style pizza. This thin-crust delicacy is made using local provel cheese instead of mozzarella, and is very crispy. Heavily seasoned with oregano and other spices, with a slightly sweet sauce, it is difficult to fold because of the crust and is often cut into squares, instead of served in slices.

A Hawaiian pizza is an American invention that has nothing to do with Hawaii. The main ingredient is pineapple. The pineapple is put atop the pizza, along with Canadian bacon, giving a rather sweet taste, very different from pizzas closer to the Italian original. Hawaiian pizza is very common in the Western United States. In fact, a number of esoteric pizzas are common on the West coast, and “gourmet” pizza is often referred to as “California-style” pizza.

This is an example of fusion cuisine, and many of the pizzas go far beyond the common tomato sauce and cheese. Thai pizza, for example, can include bean sprouts and peanut sauce, while breakfast pizza, as the name implies, may be topped with bacon and scrambled eggs. As a “gourmet” food, California pizzas are often individual sized, serving two people at most, and are not cut in slices like other common types of pizza pie. Pizza is as diverse as America itself, with almost infinite variations – all of them delicious.