Origin Production And Use Of Cheese

Cheese is a product that is manufactured from the solids of milk, and it provides a valuable food. The making of cheese was known in ancient times, it having probably originated through a desire to utilize an oversupply of milk. When cheese was first made, the fact that bacteria were present was not known, nor were the reasons for the spoiling of milk understood; but it was learned that milk can be kept if most of its water is removed. 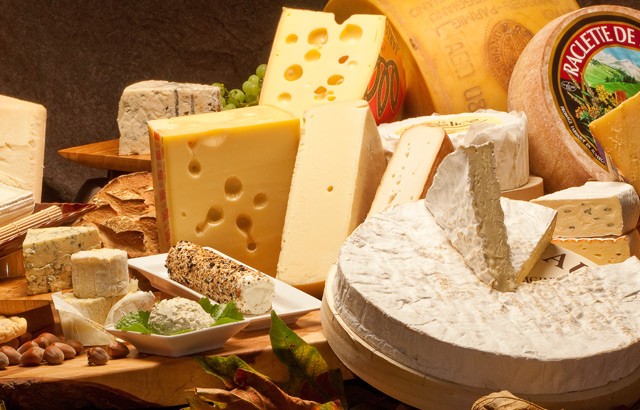 This discovery was very important, for it led to various methods of making cheese and proved that cheese making was a satisfactory and convenient means of storing nourishment in a form that was not bulky and that would keep for long periods of time. From a very small beginning, the different methods of making cheese became popular, until at the present time more than three hundred varieties are made and their manufacture forms one of the large industries of the world. In the United States, nearly all the cheese used up to about 50 years ago was made on farms, and to a great extent by housewives, but about that time a factory for the making of this product was started in the state of New York, and it proved a profitable enterprise.

From this beginning, the business of making cheese commercially in the United States has grown to the extent that cheese is almost entirely a factory-made product, in the manufacture of which the states of New York and Wisconsin lead. In either the commercial or the home production of cheese, skim milk with all or part of the cream removed is used for some varieties, while whole milk is used for others, the composition depending largely on the kind of milk that is employed. Rennet is added to the milk to coagulate it, and then the curd, from which nearly all the water is removed, is allowed to ripen.

To produce characteristic odors, flavors, and consistency, various coloring and flavoring materials, as well as bacteria, are added to the curd. The action of these bacteria is really the chief factor in the making of cheese and they are therefore not only desirable but necessary. Non-desirable bacteria, however, result in the formation of bad odors, flavors, and gases in the finished product and these must be carefully guarded against by cheese makers. Cheese offers a valuable source of nutriment for the body, because its food value ranks high. The food value in 1 pound of cheese is equivalent to that in 2 pounds of beef, that in 24 eggs, or that in 4 pounds of fish.

The use of cheese, however, is not nearly so great as its food value warrants, the amount used in the United States per capita being only about 6-1/2 pounds annually.  This is a condition that should be overcome, for there is a large variety of ways in which cheese can be used to advantage in the diet.  When eaten raw, it is very appetizing, and when used with soups, sauces, and foods that have a bland taste, it lends additional flavor and makes an especially attractive dish. In addition, the fact that it is an economical food and can be conveniently kept and stored should recommend its frequent use.

COMPOSITION OF CHEESE Since cheese is a product of milk, it is somewhat similar to milk in composition, but the change that occurs in the formation of cheese causes some differences. Nearly all the water present in milk is removed during the manufacture of cheese, so that this product becomes a concentrated food made up of all the nourishment that milk contains except small amounts of albumin, milk sugar, and mineral matter. These, because they are in solution in the water, are lost when the whey is separated from the curd. The food substances that occur in the largest amounts are fat and protein in the form of casein, which is the tissue-building material of milk. Cheese made from milk that contains some cream has in it a greater amount of fat than that made from completely skimmed milk. Besides these two chief food substances, cheese contains a small amount of milk sugar, mineral matter, and water.

On account of the large quantity of protein found in cheese, this food can readily take the place of meat in the diet; in fact, it has some decided advantages over meat. As has been pointed out, cheese yields more than twice as much food value as an equal weight of beef. Then, too, the buying and care of cheese are much simpler matters than the buying and care of meat.  As it does not require the low temperature that meat requires and does not spoil so readily, it can be bought in considerable quantity and used as desired without danger of spoiling and loss. In addition, the use of cheese as food does not require so much skill in preparation as meat does, nor is there loss of flavor and nutriment in its preparation, as is often the case with meat.

QUALITY OF CHEESE Every variety of cheese has its own standard and quality, some being hard and dry, others moist, and still others very soft. The difference in quality is due to the way in which the curd is coagulated, the amount of pressure that is put on it, and the ripening of the cheese. The holes that often occur in cheese and give it a porous appearance are formed by gas, which is the product of the growth of bacteria.

A large number of very small holes in cheese indicate that the milk used to make it was not clean and contained many kinds of bacteria. This condition could be overcome by the use of absolutely clean milk; indeed, milk of this kind is as necessary for the production of good cheese as it is for the making of good butter. Certain cheeses, such as Limburger and Roquefort, have a typical odor and flavor, the odor being due to bacteria and the flavor to mold. These are carefully grown and introduced into the cheese during its manufacture.

CARE OF CHEESE The very strong odor and flavor that characterize cheese make it necessary that care be given to cheese in the home in order to prevent it from coming in contact with other foods and transmitting its odor and flavor to them. The best place to keep cheese, particularly the soft varieties, is in the refrigerator, where it should be placed in a closed receptacle and kept as far as possible from foods that are easily tainted. It is well to avoid a damp place for the keeping of cheese, as mold frequently develops on the outside when too much moisture is present; but in case mold does appear it can be removed by cutting a thin slice from the side on which it has grown. On the other hand, cheese that is kept in a dry place becomes hard and dry unless it is wrapped in oiled paper or a damp cloth. However, such cheese need not be thrown away, for there are numerous uses, particularly in cooking, to which it can be put.

Composition And Facts Of Milk